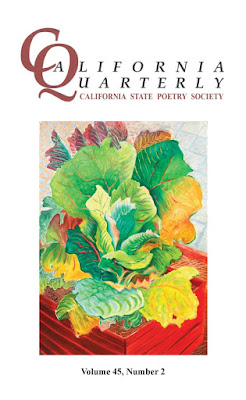 The second issue of the California Quarterly vol. 45  in 2019 (Summer) was edited by poet Nancy Cavers Dougherty and is now being mailed to members and authors. The issue is free to members and authors of poems, who receive one free copy, while the Editor has five copies at his/her disposal for promotional purposes.

What I love about poetry is its variety of voice, of ideas, its sheer range of form, and ever-fresh use of language. The poems in this issue well display this! Here are poems about destiny, free will, nature, faith, longing, remembrances, and from as far away as Kosovo to home state California. Nature features in many of the poems. It is clear that nature involves us, humankind, as part of the equation. There is exuberance of Earth’s belly first cries spring in “Unlikely and Least” (Raphael Block), and the wonder of gardening in “The Art of Transformation” (Charlene Langfur). Solace is found in companionship “By the River” (Milly Brown). In “Faded,” Raleigh Scott Wood addresses what is lost by ceaseless building, soon the sycamores will have no sky. And Fred Yannantuono asks what’s ahead in “Unsure of What the Sea’s Insurgence Plans.”

Taking to the sky, the bird of “American Kestrel” (Joyce Snyder) reminds us of the utter/balance with the world/around him. John Forrest Harrell writes, The moon drips eerie, wistful loneliness in ”Karmic Strings.” I can’t help but relate to the beautiful sounds that Margaret Rooney evokes in “Cellist,” my thanks! In “Amelia Earhart,” Reza Ghahremanzadeh finds inspiration and hope.
Interesting word choices abound: milkened sky of “Out Park Presidio” (John Briscoe), shrug-hop of “Feeding Time in the Valley” (Arlene Downing-Yaconelli), leaf-hood of “Vine in Leaf” (Doreen Stock) and others to discover.

Thank you, talented poets, for your magnificent poems! And a heartfelt thanks to all our readers! I wish to especially thank poet and longtime California Quarterly President, Editor and Treasurer, John Forrest Harrell, for his many years of devoted service to this journal. We wish him well with more time for his writing and more years as our Treasurer. 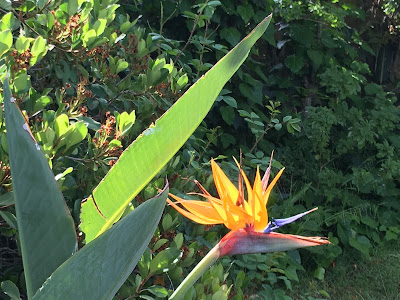 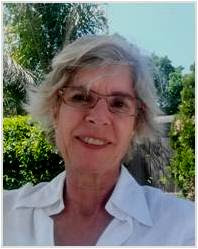 NANCY CAVERS DOUGHERTY
Nancy Cavers Dougherty recently joined the CSPS Editorial Board; she is the editor of the second issue of 2014. Originally from Massachusetts, her interest in the arts has led her to watercolors, ceramics, snow sculptures, and most recently poetry and collage. She is the author of three chapbooks; Tape Recorder On, Memory In Salt, Levee Town and a collaborative work, Silk. Her poetry has appeared in descant, Language and Culture, Compass Rose, Westview, Big Scream, The Pinch and other journals as well as several anthologies. She has served on the Sonoma County Poet Laureate Committee as the 5th District representative. She holds a Masters Degree in Public Administration from Sonoma State University and works as an advocate and supporter of several local organizations, with a focus on mental health and art therapy programs. Most recently, she has edited the fourth issue of the CQ for 2017 (Vol. 43, No. 4).

Posted by Maja Trochimczyk at 4:43 PM