Pushcart Prize 2022 Nominations from the California Quarterly vol. 48, No. 1-4 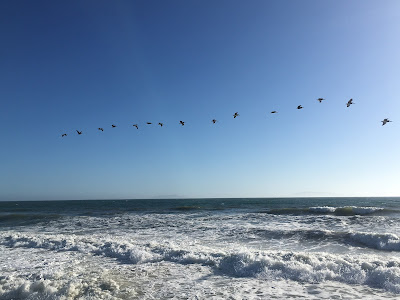 A Question Mark in Flight by Maja Trochimczyk

Winner of High Honors from The American Academy of Arts and Letters, Pushcart Prize XLVII includes over 60 stories, poems and essays from dozens of small literary presses published in the calendar year 2022. The Pushcart Prize won the NBCC Sandroff Lifetime Achievement award, The Poets & Writers/ Barnes and Noble Writers for Writers citation and was named by Publishers Weekly as one of the seminal publications in American publishing history.

In last year’s Pushcart Prize, editor Bill Henderson noted that the Pushcart Prize, “the small good thing, has evolved into an international prize drawing nominations from small presses around the globe.” As always, the selections are made by a distinguished panel of Guest Editors and hundreds of Contributing Editors. The list of authors selected and encouraged over the decades, is immense. (An index to previous volumes is included in each edition.)
While I do not believe in poetry prizes, as comparing apples to oranges to mountains to seas is a futile operation, our nominations are fantastic, so enjoy reading them 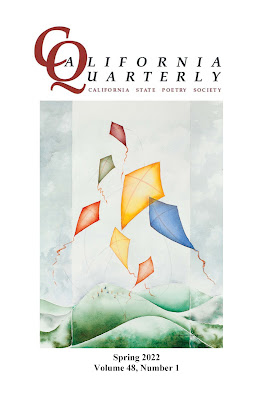 from a chorus of jumpers,

the jagged cliff’s ledge a stage 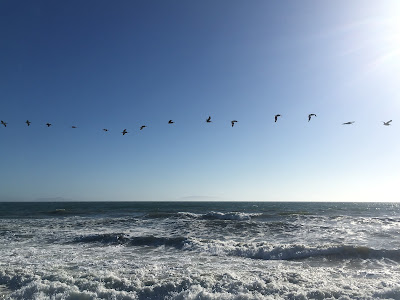 LIGHT
Mendocino, California
sunbeam alone
is a poem
but on this fallen log
with you
everything is
tongue tip
fingertip
heartbeat
who was I?
sweating brick
by brick
in gilded cities
as if
to impress
the heavens
with my cleverness
as if
to invent
anything
as alive
as this urgent
syrup
melting into
our veins
warming
pine-steeped air
Earth was made
for breathing

suddenly
I become
blue
and cloudless 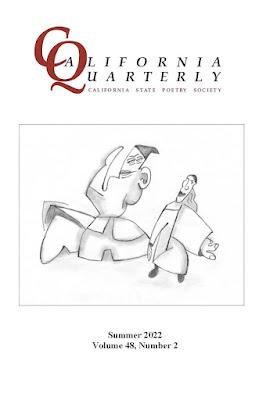 THE LAND I LONG FOR

The world I want lies under the waves,

Under many chilling leagues of water,

Beyond the reach of common daylight.

And trees of giant girth cover the ground

The land I long for is wakened at dawn

By the clear notes of flowing birdsong

From the leafy crowns of the trees.

The story was never told to me in school,

I only know it to be true because...

My blood and bones have taught me so.

Somehow I will find a way

To reach the forest floor

Through a door I cannot say

Is made of gravestone or of wood,

But which is no less real to me

Than any ordinary day. 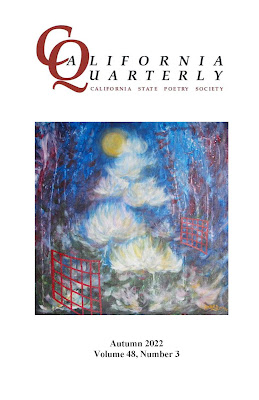 Take my hand, we shall drink golden starlight

from the brass chalice of curiosity,

We shall clothe ourselves in silver moonlight

and blush our faces with sunlight’s kiss,

and dance through the dust of time unmeasured,

whirl till we are dizzy with awe

and drunk on the songs of the universe.

I have not truly known freedom until

I have shaken off the chains of attachments

to this world, this low-land

of static, of moving,

till I felt the seductive

beckoning of the ephemeral,

the limitless melody of cosmos.

I measure myself in dawns and twilights,

in inhales and exhales, breathless moments,

as I unravel into blooming.

I am a flower eternal, floating,

drifting soundless in space on the waves

of the darkly enchanting oceans

of nebulae in purples and pinks.

And I dare you to not heed my calling,

and I dare you to resist the pulling,

the fire, the resonance in the bones

which leaves the traitorous flesh a-trembling.

And I hail to you: Come! We shall walk down,

down to the end of all, down till it’s up,

until it becomes the beginning. 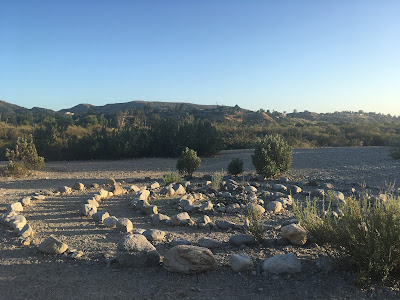 The Spiral by Maja Trochimczyk

Here it is midmorning and the valley is singing to itself.

Listen to the bees

for comfort. The hawk unfolds from the cottonwood

a mosaic of pottery shards and the ravens

croak like stones dropped in water, down the back

of the throat. Feel the earth pulling you close.

It is not nostalgia, to cling to the marshy ghosts

of a parched lake, the water snakes who swarmed

through the rattling reeds.

The breeze picks up and the hawk returns.

The heat rises and the plains begin to wave.

One shell-white egret sits in the shush

Someday all this will have silted away, the halo of song

arcing above this small pond, the calf chasing the birds.

The birds translucent below the sun.

Once this was underwater

And will be again. 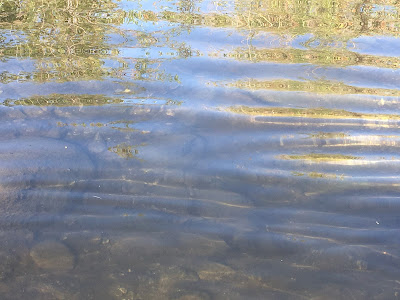 Gold Waves by Maja Trochimczyk
California Quarterly, Vol. 48, No. 4, edited by Deborah P Kolodji
In Production - Artwork not selected yet

MORNING AT MOORE’S LAKE, AGAIN
By eight a.m., the mist, like ghosts exiting, bustles and fades
in every direction, spheres barely there,
until they aren’t.
Quickly, slowly, the sun casts in.
The lake turns dark mirror, speckled with night dust
and featherings—the occasional dragonfly
stringing along morning’s heat. Reflections of trees—
and clumps of trees, borders
onto other realms, all the same as this one.
Sudden sounds—a cormorant propels
the surface like an engine. At the floating dock, hops
to join another, then settles, observes the air, the sky,
all the nothingness of the world before them.
Black from beak to tail, to webbed toe, yellowish dob
on the other one’s head, he has not moved, but to nibble a wing.
The wet one holds her wings aloft, waggles tight,
steady beats in eastern sun, diaphanous, melting to brown,
she continues, thus—I know so little—
have gendered them to my own pleasure.
With pen and notebook, sun hat, and poncho
over my pajamas, shoes
I slide on and off in cool sand.
The birds contemplate—an avian thought matrix, untouched.
One steps a quarter turn, intent, drying her body.
So much patience here. And time.
And yet—I can see the watermark on the shore reeds, the lake
is lower than last year, that much dangerously
lower. There’s a flash of red
on one cormorant’s bill, somewhere, the same bullfrog sounds
at a depth that matters, somewhere out of sight. 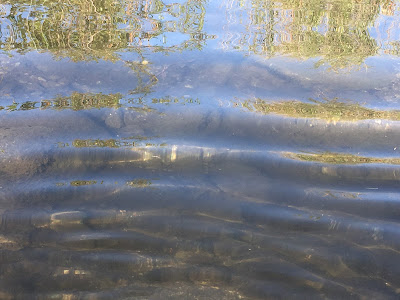 Posted by Maja Trochimczyk at 7:24 AM