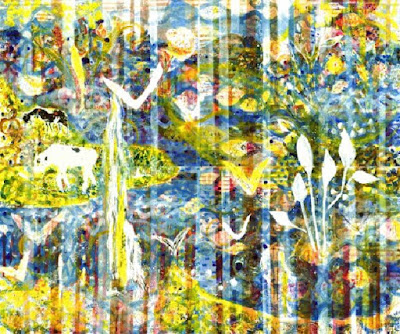 The Poetry Letter No. 2, 2021 has been emailed to members and friends of the CSPS. The PDF of this 11 page newsletter will be posted on our website CaliforniaStatePoetrySociety.org. Meanwhile, we will post sections on this blog, for your enjoyment. I selected paintings by Susan Dobay as illustrations. Enjoy!

We occasionally receive submissions of poems to be included in the Poetry Letter.  These are previously published poems that the authors would like to see in print again, and the readers would enjoy. This time we received a nice package from Donna Emerson, with the following note: “I came to know CQ in 2007-8, when I had some poems accepted and then a few months later, was asked by one of the editors to send poems for what they called “Best of the Best.”  They liked those poems (chose one) so much the two editors asked me to send to the Poetry Letter and I had 2 more poems posted there.  Terry Ehret encouraged us a year or so ago in Sonoma County to consider sending poems again.”  Ms. Emerson wrote notes to each poem, as well:

1. “The Train to Bath,” published by Ibbetson Press, summer, 2008. This event happened to me as I was vacationing one summer in England. I'd stayed with my cousin at Oxford University, then took the train to Bath because Bath is the name of my grandmother's town in western New York. I wanted to see why the Bath, New York name was chosen. What an adventure. The train trip was most eventful, when I encountered the young man I later wrote about.

2. “Wild Mercy,” published by Schuylkill Valley Journal, and then by the award winning Sixteen Rivers Press anthology, The Place That Inhabits Us, poems of the San Francisco Bay Watershed, 2010.  I also added it to my chapbook Wild Mercy, published by Finishing Line Press. 2011. The poem was inspired by visiting Yosemite Valley in winter, knowing its history for many years.

3.”Vernal Sap,” published by Chicago Quarterly Review, Winter, 2020, was inspired by our family's tapping of our sugar maple trees on the family farm in Bath, New York. We tapped 15 trees to secure 40 gallons of sap, out of which came one gallon of syrup. A tradition begun by earlier generations of my mother's family, in the nineteenth century, when they used horses and a sugar shack. The maple tree is New York's state tree. 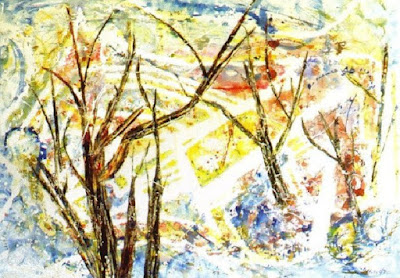 Our relentless Lady of Mercy
offers none today, makes waterfalls
from three directions across her broad
back, froth on her face,

I lose track of her down the thousand foot
drop to Mariposa, lost in the highway's
descent, I don't see her veer north until I feel
the prick of winter almonds near Planada.

Before I miss her roar, I'm at the neon
Modesto Knife and Saw;
she slides noiselessly under my feet
on her way to San Pablo Bay.

Like ladder rungs from Route 49, the Merced,
Tuolomne, Mokelumne and Stanislaus meet
the wide San Joaquin, pushing their lives
to the sea, long before the orchards with their

white painted trunks, before the first people,
before the people who conquered
those people, before gold, the sprawl
of Modesto, Turlock's blinding lights. 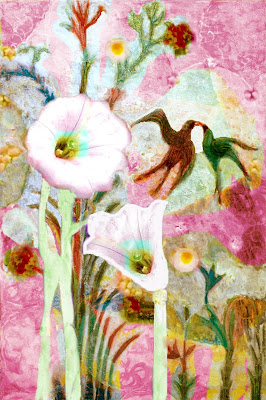 The Train to Bath

In praise of the boy who
rode the train to Bath
and gazed at me ‘til Wallingford:
he sat tall and straight, his shaggy head
across from mine, higher than mine.

He was England, youth of promises, decrees,
beveled cheekbones of the Royals,
hollows where I could lay my temple.

Arching to see him go, I watched
his long back. Silence. I slumped in my seat.
Then the train whistle, the lurch,
and to my surprise, his return
with an armful of yellow roses.

He will take them to his love.
We looked. Or his mother. We smiled
at the same time, knees almost touching,
jostling along, without words.

We stopped at Bath. We glanced,
our eyes close, as I stood up.

He handed me the yellow flowers.
His smile stretched around me

for the rest of my life. 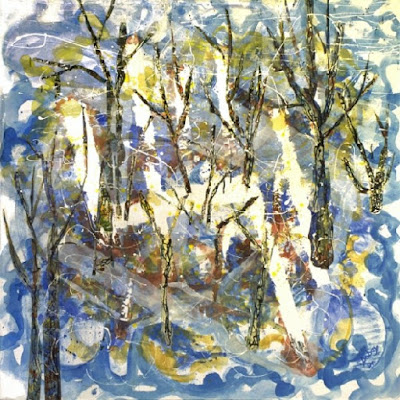 We run with our pails to the sugar maples.
Marked last summer, when leaves were easy
to read, tree crowns high and wide.
Daughter taps the spile in place
midst several versions of ahh
as clear sap drips out.

We discover an unexpected bush of sugar maples
across the road from the original trees.
Their seedlings must have blown straight across the road,
so that nine young trees stand equidistant,
most too young yet to tap.

In a day, fifteen trees are tapped, named, embraced
for their beauty and life force, given freely to us,
as long as we protect them from harm.

As did my mother, uncles, grandparents
and great grandparents
over the last two hundred years, in these woods.

This marks the start of Spring,
when we see water flow for the first time, under the ice
on the road.

Daughter finishes her work, hugs the tree
and names it “Eldest Granddaughter.”

The gushing older tree by the old farmhouse
we name “Grandmother.” Her bark thick,
scarred, lumpy in spots like a darned sock,
holds a frozen bit of sap where a vertical,
waist- high crevice sits.
It must have access to her heartwood. 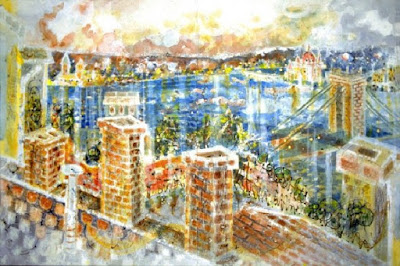 We occasionally receive submissions to the Poetry Letter by mail, and it is a pleasure to read through a poet’s favorites; also recognized by awards given to these poems. Jeanine Stevens’s ekphrastic verse is so vivid that it creates images even without being able to see her inspiration, the photographs she writes about. "New Dehli" won First Place in the MacGuffin Poet Hunt, 2014 and was published in The MacGuffin, 2014. "Frida" won First Place in The Ekphrasis Prize, 2009, and was published in Ekphrasis, 2009. Enjoy!

She is the brick wall that defines her,

the thin arms under the sari.

She is the madras pattern

of marigold orange and olive green.

She is the littered ground,

the ground scattered with bricks and refuse.

One brick is her table. She entertains

simply. There are no spoons,

only hands to mix grains and river water.

The street is her open window,

her furniture, the battered chair tipped

on its side, a cupboard of sorts for bent pans.

She is the smoke stained wall

She is the big toe that grips the ground.

Nearby, are bits of denim,

Back straight, she does not slouch,

looks directly at the camera in a half smile.

She is the pierced diamond

carried in the side of her nose

and the red spice she holds to mix

with her evening meal. She is

the memory of golden flocks on hilly flanks,

the darkness of things being burnt,

Her only book, a book of matches,

her tablet: the wall, her pen: bits of charcoal.

She doesn’t worry if her seeds

are not planted by the spring equinox.

~after a photograph, National Geographic 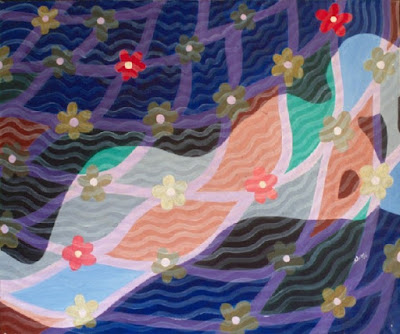 Frida in a White Dress

~a black and white photo

More beautiful than self portraits

with monkeys and snakes,

communion dress, you are all

caught in your left hand,

seems to mock the girlish

the gorget at your throat,

reminiscent of the spiraling sun,

on the neck of a hummingbird.

into the three-legged bowl,

a replica of ancient sacrificial

against the stucco wall—

from cradling so much light. 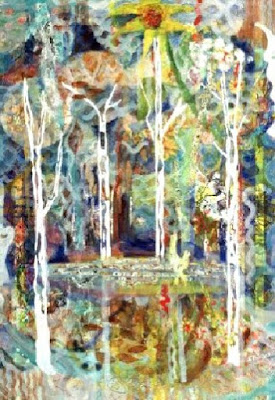 A POEM BY SOPHIE RUNDUS

It is nice to see generation after generation of poets turn to verse to capture their impressions of the world they live in and co-create.  here's a brief poem by a nine-year-old poet, Sophie Rundus, sent in by her Dad. 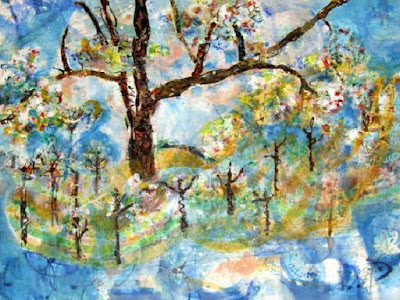 We received a book of poems by Gail Wronsky for review, and I was not yet able to place it (raise your hand, if you would like to review it!). Meanwhile, I wrote a reflection based upon reading that book. Let me just say that I profoundly disagreed with its philosophical premises. So there it is, a polemical screed, almost a poem…

On Reading Gail Wronsky in this Universe

Your blindness is self-inflicted, oh, teacher of generations,
hobbled by erudition – the blind leading the blind –
into the abyss – I’d like to say, but, no, just into a ditch
by the wayside, right next to the straight, white, sandy road
leading due East. As in Easter, or better still, the Sun Rising.

How not to see the world as dying, shrouded in a fog of sophistry?
You simply have to stop cursing. You only have to bless it. Your words
transmute the air you breathe, crystallize in your water.

Have you ever looked at the Sun, oh, poet of a thousand metaphors,
ten thousand accolades? Have you ever listened to that quiet voice,
wordlessly singing Hosanna? The Sun is Born. The Light so Bright.
The rays so full of little hands touching, caressing, smoothing out
each particle of matter twirling in its allotted space?

Yes, I know, you have your themes – Apocalypse, aging, loss,
despair, genitalia…Yes, I know, everything has its price.
But how can you be so blind? Oh, poet of poets, the blind
leading the blind – into the abyss, I’d like to say, but, no,
into a ditch by the wayside. 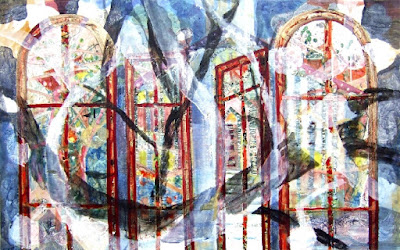