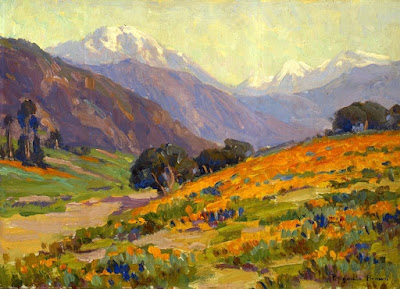 Welcome to the Fall issue of the Poetry Letter for 2021.  You will enjoy previously published poems by Greg Gregory of California, and Franklin Gillette of Colorado. Since both poets have been inspired by natural beauty, I selected California landscape painters of early 20th century to illustrate this issue of the Poetry Letter.  Benjamin Chambers Brown, 1865-1942), Anna Althea Hills (1882-1930) and Selden Connor Gile (1877-1947) are hardly household names.

As Californians enjoying the natural beauty of the same landscapes they painted, we should learn something about them. I am endlessly mesmerized by the waves of the Pacific and have taken countless photos of the waves breaking at Mandalay Beach, Hermosa Beach or Topanga Beach. The crystalline jade, aqua and sapphire shades of water are so full of life and the energy of water so incredibly powerful.  Awe-inspiring! Two paintings I found capture the beauty of our ocean.

Other images show the grace and beauty of the trees, flowers – meadows of California poppies! – as well as mountains and streams we can see after leaving cement wastelands of cities and venturing into the unknown. Previously, I picked landscape paintings by Karen Winters; this time, we can see the tradition she continues to bring to life. We should also know more about California poets, of course. CSPS tirelessly works for this cause by publishing the California Quarterly, organizing contests, and more. Next year, we will be celebrating our 50th anniversary. The organization was founded in 1971 but the first issues of the Quarterly came out in 1972, hence the anniversary will be celebrated that year.

The book reviews from Poetry Letter No. 3, 2021, are posted separately on this blog. 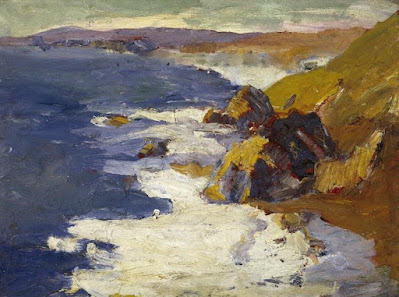 in our evening ears

in the lull of summer

on the lake's blackness.

The thing of the world is

the softness of its secrets.

or the light of an extinct star,

traveling so long its last existence

rests on the surface of the water

where light and dark

The heavy bones of a loon

let it dive easily into the night water,

in the indifferent dark among

Unlike the loon we

cannot easily force ourselves into

the void underneath.  We

remain at the edge,

who touch pianos so they

for the constant spill

of moon and stars.

~ Originally published in The Avocet

The airwebs of late Summer -

in the face of Fall,

ballooning into an infinite sky.

woven fabric of light and shadows -

The aphasia of bare soil,

the speech of tongues of

of the empty earth.

The rubric of tubers and roots

cloyed in tangles of clay, all

astringent and acerb in

life asleep at the center.

ripe for release in tongues of

balloon into an unknown year. 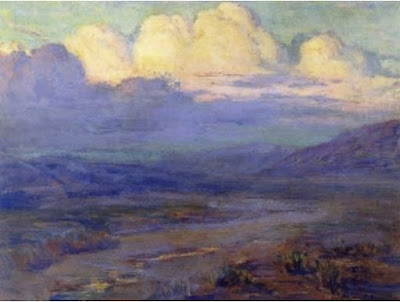 Crawling into the entrance

I hear the soft flutters, the squeaks - small

bats living deep in a hole in

stone and clay.  My lantern

plays on the walls in shaman's images or

in their own echoes, clinging to rock

half out of stone, wrapped

while clinging with slight bones,

to the crevices, fragile

transforming just before dusk, exiting in

from stone and clay into night

to hear only what is echoed back.

~ Originally published in The Kerf

By day, the kelp sways below the cliffs,

The waves never stop moving to and fro, to and fro.

The kelp holds fast to its submerged anchors.

The pound up onto the rocks.  They rarely let go.

then pop up like small black dots and look around,

surprised at where they find themselves after surfacing.

Voice is the lightest thing to carry along the cliff path,

a tongue in the sea air, a privileged perspective

for an instant, to seem like one who never dies.

A rock falls from the cliff into the waves below.

I remember the old Beatles' lyric, "Here comes the sun".

The water glistens to the horizon from the eroding cliffs.

A fool walks one more day and leads a lucky life.

I must send postcards to others who are not here.

The cormorants dive.  The kelp hangs on in the blue sea.

The sea sings its song.  It has ever since I first saw it as a child

from my first walk on this cliff trail.

I looked down, watching the waves come into the rocks

and wondered about mermaids, who, after their life

of a thousand years, finally turned into sea foam.

~ Originally published in Quill and Parchment

a trace of their salts in

perhaps to bring up

to feed the pulsing hearts

from a fading past

fast receding into nothing.

these fabrics of soft glass

pulled in and out

by tides and who,

their lucent domes gone into

on the water's surface.

~ Originally published in The Avocet 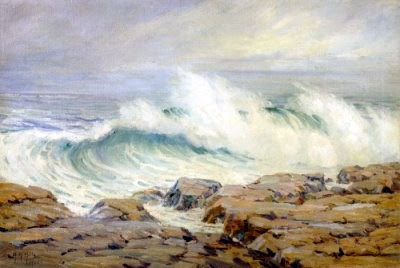 Franklin Gillette, a Colorado native, is finishing the first instalment of his book of poems: Word Atlas (Part One). His work has been selected by Poetry East, Blue Unicorn, Light Quarterly, CSPS, and more. His operettas were set to music by various composers and performed in Kansas City and New York.  He illustrates his own work.

SALUTE
Your feet stand on the lower planets,
Your legs are mountains-- alpine stairs,
Your knees are flowing with bird flutters,
Your thighs hold the atmosphere,
Your yellow robes like the evening twilight
cover up the ocean of your loins.
Your breasts contain galaxies that range,
Your heart pounds religion in motion,
Your mind shines the brilliance of the moon,
Your chest is the golden throne of fortune,
Your head echoes truth in endless caves,
Your smile is the cause of all illusion.
Your arms are filled with splendid angels,
Your hair is murky clouds of outer space,
Your eyelids turn the night and day,
Your touch is lust, Your feet are a lotus,
Your hairs are drugs and herbs, Your veins rivers.
Death is nothing other than Your shadow.
Your intelligence is all that is divine,
Your head is the place of higher planets,
Your back is where irreligion hides,
Your tongue holds all the water spirits,
Your neck: vibration, Your chest is the Truth,
Your words forever are the holy chants.
Your nails shed leaving giant boulders,
Your breath circles wind to the stars,
Your brow heats with righteous anger,
Your activities are rituals of fire,
Your tongue licks lips creating craving,
Your ears open out to all directions.
Your eyebrows (on suns of eyes) give warning
to friends and enemies that are in You,
--the galaxies are atoms of Your Being.
~  A shorter version published in Poetry East, Number Fifty–Seven, Fall 2006.  4th and 5th
stanzas added here.
THE PENGUINS OF ANTARCTICA
Before the ever-bellying radiant sky
they break sea hobbling past dunes of ice
whose silent monuments of compact snow
cut to mystery like unknowable gods,
lonely, lacking ancient worshippers.
Huddled on the bottom of the earth
what they must endure-- the dimming skies,
months without food, ice catapulting,
skirmishes of wind which freeze the will
of our boldest.  --Here they must find warmth
pressing to great circles beneath moon and stars,
and millennia after millennia of rebirths.
~ Originally published in The Aurorean, 2,  2010- 2011.
https://www.youtube.com/watch?v=jN-ro2jlezE
FRIEND RELATES A CHILDHOOD MEMORY
We were scuba divers telescoping
in the Pacific’s deep caverns where dark songs
of whales vibrate through the undertow.
Seagulls plied like knives on piano wires
as if to warn us when we leaped to sea,
yet we clawed down, to fulfill our mission
reaching for the hushed nocturnal floors.
Water weighed heavier; the sunlight dimmed;
flaming out were eels, fish and squid.
Our hands reached solid mass and yet it slid
from our grip.  A humpback paddled from us.
Yet once we found the basement of the sea
we broke the ocean’s crest and there we saw
our little boat’s mast on the horizon.
~ Originally published in Poetry East, Nos. 64 & 65, Spring 2009.  The first sonnet from “Songs Beyond News.” 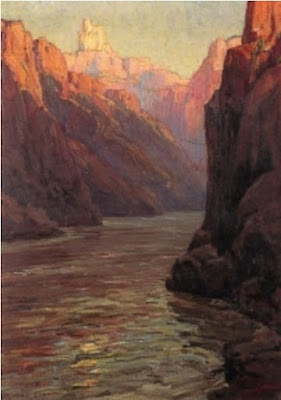 Posted by Maja Trochimczyk at 6:25 PM