The Pushcart Prize Nominations from the California Quarterly 2021 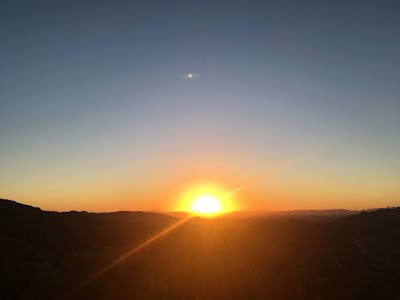 The editors of California Quarterly published in 2021 - Bory Thach, Maja Trochimczyk, Konrad Tademar Wilk and William Scott Galasso have selected the following poems for nominations to the Pushcart Prize, a tradition of small presses and poetry journal publications. 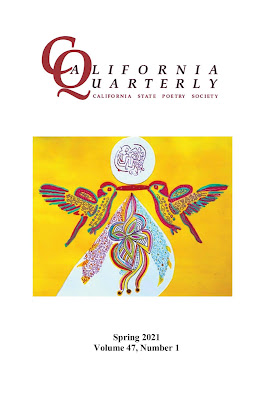 CALIFORNIA QUARTERLY 47 NO. 1
EDITED BY BORY THACH
BLUE FANTASIA
Blue that dwells in larkspur and iceberg,
in herons, little and great,
in swaying lupine, and wood thrush eggs
nestled on the forest floor;
on the magisterial covers
of the Oxford English Dictionary
and in faded hydrangea petals
pressed between its pages;
in first prize ribbons,
copper sulfate crystals
and the iridescent wings
of the morpho butterfly.
The hue of lobelia and gentian,
of faceted sapphire,
wild chicory at summer’s end
and juniper berries in fall,
is the color of mussels clattering in a bucket,
not dreaming of steam, of eyewash cups,
varicose veins, surgical scrubs,
cigar smoke, gas flames, exhaust;
the color of the policeman’s uniform
and his cruiser’s flashing lights;
of bruises, winter prisoners,
the eyes of their guards, tattoos.
Ruth Holzer
Herndon, Virginia
SHEER OPTIMISM
All endings temporary.  The very idea
shunned.  Pauses become the new edge,
more fender, cushion, and curve, so that
the minute and second hands swerve slowly
and always return.  What were once breakdowns, now
commas, naps, momentary gaps in a sub-category
of continuum.  Words like
death, fail, cease, redefined to synonyms of
seam, open shining doorway, soft lifting kite.
Consternation become akin to
mixing bowl, with an alternate meaning
of swirling multi-colored lights.  And dread
conveying a type of shivering that warms.  All
prophesies, except those that equate with
everlasting joy--gathered up and tossed.  Zero
re-assuming its role as place-holder for those
vacationing, still in touch.  Done, done with.
Loss, a beloved pet, ever young.  Gain
and renewal, inevitable as the rising sun.
A chorus not unlike birdsong or bees
foraging, joined by hopeful amens,
hope having been raised up
many rungs to become far less
tentative, much nearer to certainty.
Lavina Blossom
Riverside, California 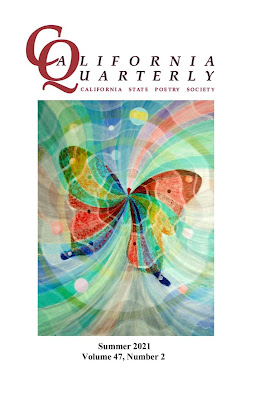 CALIFORNIA QUARTERLY 47 NO. 2
EDITED BY MAJA TROCHIMCZYK
PROVIDENCE
This evening when you were tuning your guitar
and the dog began to howl from his spot on the Turkish rug
I drifted back to our grad school days in Providence
before everything started coming down—the Berlin Wall
the Twin Towers—each memory a burst of color
our pale pink Victorian on Hope Street
the lavender mailbox with its duct-tape roof
the flock of escaped green parrots on the telephone wires
their bright hues flashing, rising into an indigo sky
and the yellow velvet couch on the porch
beckoning neighbors to stop by with tomatoes and lettuces
from their gardens, musical instruments, and bourbon
those warm summer nights before grievances had hardened
when the world was ripening before us
and anything—everything—was still possible.
Diana Donovan
Mill Valley, California
TREE SONGS
Alive, the California forest knows
how to orchestrate itself, curate, permeate, and germinate,
a permanent, sly installation,
yet every faithless flower has reverence for the air,
and I would swear an oath, John
Clare, that I’ve heard the voluptuous trees sing, members
of the adagio Earth Choir,
contributing with the birds, frogs, a great hawk ballet,
and this music is a per diem Art work, naturally
I listen, agog, in Yosemite to redwood General Sherman’s arias,
and others, nameless, participate, too,
and the forest invites this bohemia, this perfection
of trees, and I know if I were undeniably one
of them, strong rooted, I’d sing to cultivate an audience stand-
still … in bluesy Gaia’s auditorium.
Dana Stamps II
Riverside, California 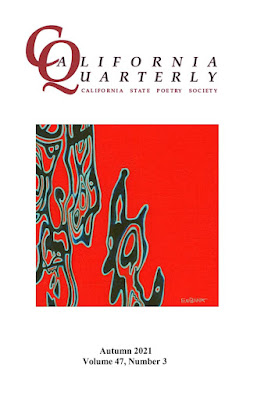 CALIFORNIA QUARTERLY 47 NO. 3
EDITED BY KONRAD TADEMAR WILK
QUANTUM BIRDS
It lies beneath.
You get to it by digging
to the drumroll of hummingbird wings.
I sought it deep
in the quantum realm, the wave
function, the answers
to the galaxy of starling murmurations,
to the kotuku in that faraway lagoon,
an apparition in nebulous plumage from the spirit land.
That elusive oracle tells all the truth, but slant,
metes out mere probabilities
to even the most meticulous mind,
entangles me in the duality of
defeat and awe.
But a bird is greater than the sum of its parts
—the bluebird that fashions his cloak
from a piece of sky, the green heron
stealing a ray of sun to iridesce between the reeds.
In the quantum world, a bird
may be alive and dead.
There is no certainty.
When you cage one truth,
the others fly.
Still, the sandhill cranes will alight
on the river basin
and start to dance.
Ida Marie Beck
Livermore, California 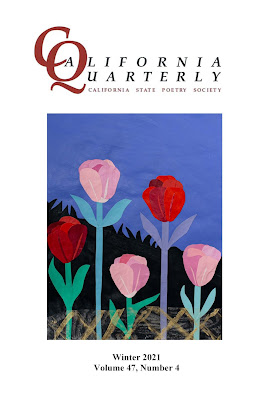 CALIFORNIA QUARTERLY 47 NO. 4
EDITED BY WILLIAM SCOTT GALASSO
INTENTION
I have traveled all the way to the rainforest
hoping I might capture some of it
in line and color. I watch distant thunder clouds
sweep across the tree canopy until they reach me.
In the humidity, watch tree branches laden with orange flowers
become engulfed with strange birds,
while a hoop-skinned snake sidles its way
past the indigenous-wood door, flicking its tongue.
Weeks have passed since I first arrived,
the painting set and empty sketchbook remain
as if held by a tenfold gravity to the pine-top table.
The idea of picking them up and simply walking
to the edge of the garden where the wilderness takes over,
is overwhelming. This might have been how artists
felt who accompanied Darwin to the Galapagos,
or Amerigo Vespucci to the New World.
But they with pen and ink, gouache and watercolor
brought back images of unfamiliar flora and fauna,
the lay of the land, something of the people.
And I’m running out of time, next to this unfamiliar world
luring me with its beguiling perfumes, its racket of unfamiliar birds,
this unknown nature breathing within its own body -
this symbiotic place that I find so hard to disturb -
this place should I enter, will be changed forever.
Mike Sprake
Costa Mesa, California 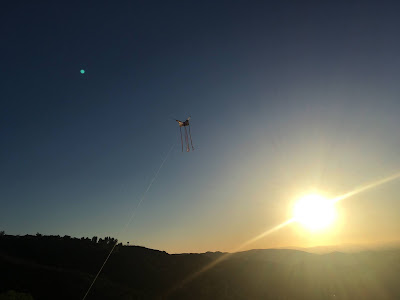 Posted by Maja Trochimczyk at 6:46 PM