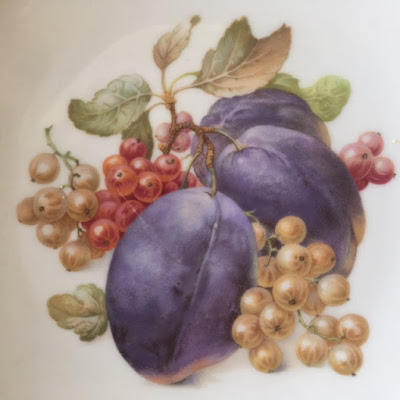 Plums and Currants, image from a fruit plate.

Do you see how luscious the Italian plums, red and white currents are in this picture?  The author of this delightful painting remains anonymous and the painting itself is from my fruit plate with gold trim that I found in a California Goodwill. Too many “modern” sets are plain, white, thick, clumsy, and plain boring. These bunches of fruit envisioned by an Anonymous (the most prolific author of works of art in human history!) for placement on delicate porcelain, and then on dining room table, come from the still-life tradition in European painting that extends back to the Renaissance. Maybe it is time for it to be reborn?

Is everything new better? Is “modern” more praiseworthy for its Bauhaus-inspired simplicity than the overly ornamental Baroque? These currants remind me of a currant bush in my childhood garden and the joy of picking the ripest, golden drops of tart juice, still more sour than sweet. My Mom made the red and white currants into jelly, preserving them without cooking, to keep the Vitamin C and nutrients alive. In the Poetry Letter we preserve once-published poems and share the sweet and tart taste of words. After all, being fruitful means being creative. Enjoy the fruit of poets’ labor! 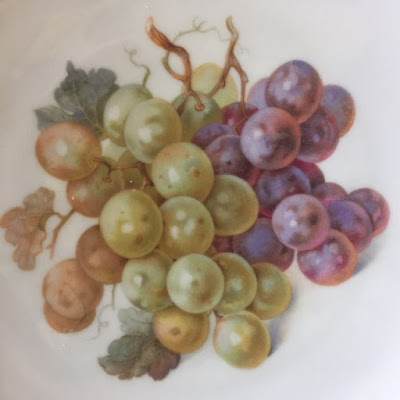 Jeff Graham studied English and Creative Writing at San Francisco State University. He is the author of the chapbook The Eye of Morning (Zeugma Impress Inc.) and one of 12 poets featured in Crystal Fire. Poems of Joy and Wisdom (Moonrise Press, 2022). His publications include appearances in journals such as Blue Unicorn, Indefinite Space, California Quarterly, Asheville Poetry Review and Grasslimb. Jeff is also a contributor to various haiku journals.

Slight breeze on a slight day.

The moth is on the bough.

The bough falls to the ground.

The moth falls with the bough.

The moth equatorially maps out the fiery.

Flicker of wings, of glint within glass fractures.

The moth equatorially crawls the skyline.

No, it is the lantern that staggers

as on the horizon it passes past.

Between knowing what to do

without doing, and doing

without knowing what it does,

the moth falls not from,

but within its capacity for grace,

after singeing wing to star.

The moth trudges the waxing moon

while traipsing through the wax:

An unheld candle draws near the ever-

is snuffed by a clasping of patterned wings –

is snuffed by claspings of patterns.

on and off the porchlight bulb’s

together with the usual moths’ usual.

Swift kick of the leg of the collective

of a cenotaph of sunrise.

The moth is born by end of day.

The moth is old by end of night.

Fallings and Falls amid leaves

hesitancy not of will but of lightness –

upon and in-with an indifferent stream

that leads to a nondiscriminatory sea.

Of stars and of moons clung to by moths.

Of the suns of stars and the star of the sun.

The night is old with the moth’s decline.

The sea is young by morning

NOTE: Section 3 is the edited version of a piece published in Common Ground Review, Fall/Winter 2018 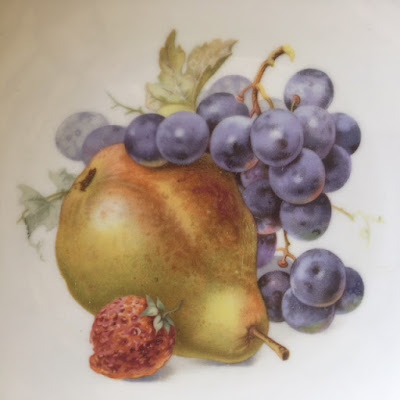 Canopy of bare branch above,

leaf over leaf over what unrevealed underfoot:

Between each stride lie random patches

of winter grass, too green to be green

beneath and between the sway of brown

of summer, made grey by summer’s end,

Between each grass blade waits the void.

Between each void stands a patch of grass.

The shadow shared by the pine and me

becomes the whole of night.

The shadow shared by the pine and me,

who lean into each other’s shoulders,

lets fall its leaves as humans do.

I have grown tired of sipping my gaze’s reflection,

of eclipsing my reflection’s reciprocation

with the swish of a plastic spoon.

I ended up swallowing night

and am drunk on the distant lights of stars,

Haloed moon and I – gratefully,

none but the moon and I;

none but the moon and I to notice.

In the inch between autumn and the hour –

miles of which ahead and behind,

miles of which wide.

And as such, the inching of my steps –

mileage made up of autumn’s momentarilies.

And as such, a momentary I.

of Autumn’s catalogue of autumns. 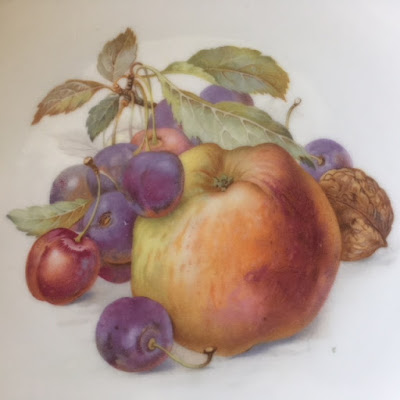 WINNERS OF MONTHLY CONTEST IN APRIL, MAY, JUNE 2022

Alice Pero, Monthly Contests Judge, selected the following winners. For April,  the 1st Prize was awarded to “Awaken” by Debra Darby. For May (Personifications, Characters, Portraits) the 1st Prize went to Carol L. Hatfield  "Cloud on the Ground" and the 2nd Prize to Joan Gerstein "White on White."  For June (the Supernatural), the 1st Priz wineer was, "Buffaloes Escape" by Pamela Stone Singer.

Wrapped in cloaks of snow, buffaloes

Embedded in their bones

from outer space, their horns speak stories of worlds

where they travel calm plains.

Water songs and ceremonies, their messages.

Speak the holiness of earth.

CLOUD ON THE GROUND

(for my mule, Andromeda)

Never one to be

and keeps it all 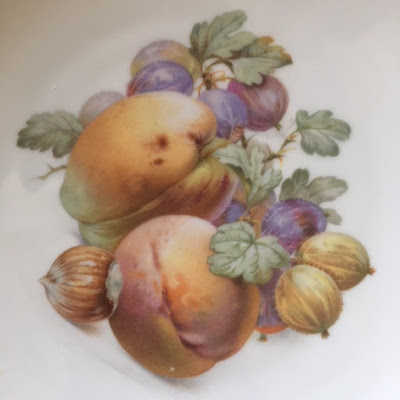 Posted by Maja Trochimczyk at 2:54 PM