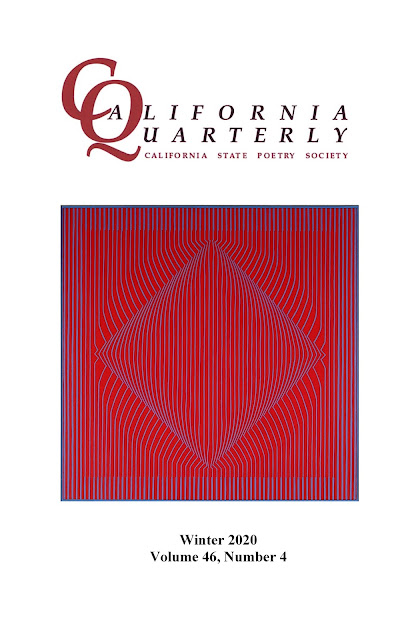 The end of one year, the beginning of another. Calendar pages measure our days and months, spiraling through the years… This issue of the California Quarterly measures the passage of time with tetragrams by Richard Kostelanetz, a two-line poem by Elsa Samkow-Frausto, three sedoka by Margaret Saine, and a variety of longer verse, marking time with the spacing of their layouts.

I like starting to edit a new issue of the CQ with a set of themes. In this case it was the sun, solstice, and myths or folk-tales. Yes, we received a lot of “sunny” poems, for instance, from Saine (“the sun paints /a turquoise ball / behind my eyelids”) or James Tweedie (“The Silence of Sunrise”). Yet, there were far more poems that celebrate oceans, lakes, hues of water, trees, motion, transience, and the perennial themes of love and gratitude. Poets are grounded in the soil of their gardens, calmed by birdsong (Elina Petrova), or by watching ocean waves. “What do you learn when you face only blue?” asks Hedy Habra. On the quest to unravel secrets (Glory Cumbow, Sonya Sabanac), poets are taken “to that edge where / everything disappears” (Pamela Singer), an experience that “still makes you soft with longing” (David Rosenheim). How real was it in the first place?–asks Jane Stuart. “We are the human starfish,” concludes John Grey, blessing alternate universes of reincarnation.

Fittingly, the cover art is Constant Return II (1965) by Polish American painter, one of the creators of the op-art movement, Julian Stanczak (1928-2017). I am  grateful  to  the  Stanczak  Foundation of Cleveland, Ohio, for allowing us to use this image. Stanczak’s WWII deportation from Poland by occupying Soviet  forces, followed by years  of imprisonment in the gulag,  ended his dream  to become a cellist, but opened a new path, that of an artist  of vibrant  colors  &   intricate   lines.   Monumental,   carefully   crafted  paintings   juxtapose   complementary   or   contrasting colors that he envisioned for us to enjoy. In this process of transmutation of tragedy and trauma  into  the  sublime,  timeless  art,  Stanczak  became  an  alchemist  of   vision,  transforming “Lead into Gold.” Poets also transmute the “Lead” of their experience into “Gold” of  their  poems,  using  words  to  define  and refine what they see, hear, and feel.  The  quest  for  artistic  truth continues on the  pages  of  this  journal,  ending  the  year  2020 with a plethora of real or metaphorical sunrises. 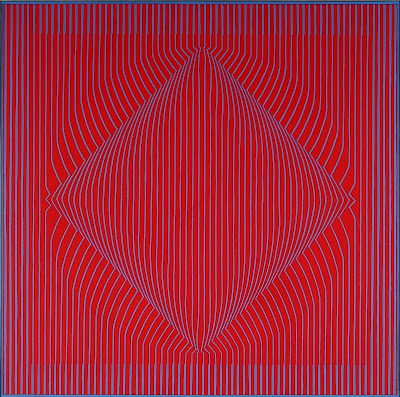 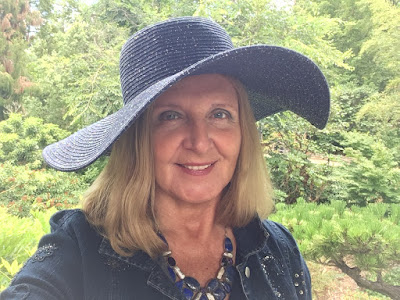 ABOUT THE EDITOR
Maja Trochimczyk is a Californian poet, scholar, translator, photographer, and non-profit director from Poland. She studied musicology at the University of Warsaw, Poland (M.A. 1986) and sound engineering at the Fryderyk Chopin Academy of Music in Warsaw (M.A. 1987). In 1988 she emigrated to Canada and in 1994 she earned her Ph.D. in musicology from McGill University in Montreal. She held Postdoctoral Fellowships from the Social Sciences and Humanities Research Council of Canada (1994-1996),and the American Council of Learned Societies (2001-2002).
Dr. Trochimczyk has been giving public readings and publishing her poetry since 2007. She published five books of poetry: Rose Always - A Love Story, 2008, rev. 2020; Miriam's Iris, or Angels in the Garden, 2008, both from Moonrise Press; Slicing the Bread (Finishing Line Press, 2014), Into Light, and The Rainy Bread (Moonrise Press, 2016). She also edited four poetry anthologies: Chopin with Cherries: A Tribute in Verse (2010); Meditations on Divine Names (2012), Grateful Conversations (2018, co-edited with Kathi Stafford), and We Are Here: Village Poets Anthology (2020, co-edited with Marlene Hitt). Her poetry and photographs appeared in numerous journals and anthologies, among others: Clockwise Cat, California Quarterly, Cosmopolitan Review, Magnapoets, Quill and Parchment, Ekphrasis Journal, Edgar Allan Poet Journal, Epiphany Magazine, Lily Literary Review, Loch Raven Review, Lummox Journal, OccuPoetry, Quill and Parchment, Phantom Seed, Pirene's Fountain, poeticdiversity, Poezja Dzisiaj, The Sage Trail, The Scream Online, San Gabriel Valley Poetry Quarterly, Spectrum and anthologies by Poets on Site, Southern California Haiku Study Group, and other collections. She previously edited CQ 44:4 and 45:3.
She published seven books of music studies, including: Gorecki in Context: Essays on Music (2017),  Frederic Chopin: A Reserch and Information Guide (Routledge, 2015, co-edited with William Smialek), Lutoslawski: Music and Legacy (Polish Institute of Art and Sciences in Canada, 2014, co-edited with Stanislaw Latek), and Polish Dance in Southern California (East European Monographs, Columbia University Press, 2008). Her articles appeared in American Music, Contemporary Music Review, Musical Quarterly, Computer Music Journal, Muzyka, Studia Musicologica, Leonardo, Polish American Studies, Polin, Polish Review, The New Grove Dictionary of Music and Musicians II (Macmillan), Women Composers: Music Through the Ages (G.K. Hall), Lutoslawski Studies (Oxford University Press),  The Age of Chopin (Indiana University Press), 100 Lat Muzycznej Emigracji (MEA Kultura 2018), and Homage to Tansman (Wroclaw, 2019). Her musicology work was translated into Polish, German, French, Swedish, Chinese and Japanese.
Dr. Trochimczyk is a recipient of PAHA's Creative Arts Prize (2016) for her two poetry books about WWII experience of Polish civilians, including her family under German and Soviet occupation (Slicing the Bread, 2014 and The Rainy Bread: Poems from Exile, 2016). She was also honored with PAHA's Distinguished Service Award (2014), and the 2007 Swastek Prize for her article about Polish folk dance groups in Southern California published in the Polish American Studies. In 2012 she was presented with a medal for the promotion of Polish culture "Zasluzony dla Kultury Polskiej" from the Minister of Cultural Heritage of the Republic of Poland. She also received numerous city and county honors celebrating her years of volunteering for the Polish-American community.
She was nominated Acting President  of the CSPS in February 2019 and elected President in October 2019. She currently also serves as the President of Helena Modjeska Art and Culture Club in Los Angeles. In 2009-2020, she served as the Board Secretary and Communications Director of the Polish American Historical Association. She was a member of the Editorial Board of the Ecomusicology Review and manages blogs for the  CSPS, Moonrise Press, Village Poets, and the Helena Modjeska Club, as well as her personal poetry and music blogs: PoetryLaurels.blogspot.com and ChopinwithCherries.blogspot.com. 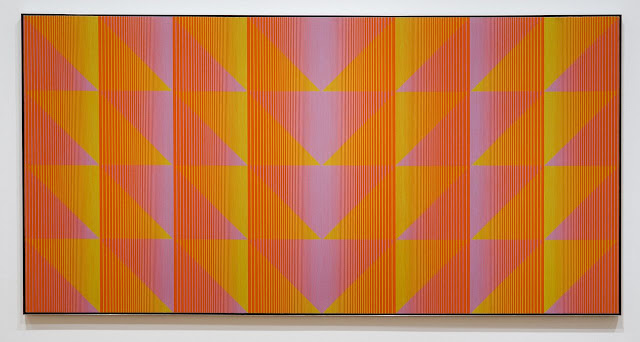